Preemption, otherwise known as preemptive scheduling, is an operating system concept that allows running tasks to be forcibly interrupted by the kernel so that other tasks can run. Preemption is essential for fairly scheduling tasks and guaranteeing that progress is made because it prevents tasks from hogging the CPU either unwittingly or intentionally. And because it’s handled by the kernel, it means that tasks don’t have to worry about voluntarily giving up the CPU.

It can be useful to think of preemption as a way to reduce scheduler latency. But reducing latency usually also affects throughput, so there’s a balance that needs to be maintained between getting a lot of work done (high throughput) and scheduling tasks as soon as they’re ready to run (low latency).

The Linux kernel supports multiple preemption models so that you can tune the preemption behaviour for your workload.

Originally there were only two preemption options for the kernel: running with preemption on or off. That setting was controlled by the kernel config option, CONFIG_PREEMPT. If you were running Linux on a desktop you were supposed to enable preemption to improve interactivity so that when you moved your mouse the cursor on the screen would respond almost immediately. If you were running Linux on a server you ran with CONFIG_PREEMPT=n to maximise throughput.

Then in 2005, Ingo Molnar introduced a third option named CONFIG_PREEMPT_VOLUNTARY that was designed to offer a middle point on the latency-throughput spectrum – more responsive than disabling preemption and offering better throughput than running with full preemption enabled. Nowadays, CONFIG_PREEMPT_VOLUNTARY is the default setting for pretty much all Linux distributions since openSUSE switched at the beginning of this year.

Unfortunately, choosing the best Linux kernel preemption model is not straightforward. Like with most performance topics, the best way to pick the right option is to run some tests and use cold hard numbers to make your decision.

What are the differences in practice?

To get an idea of how much the three config options lived up to their intended goals, I decided to try each of them out by running the cyclictest and sockperf benchmarks with a Linux 5.4 kernel.

If you’re interested in reproducing the tests on your own hardware, here’s how to do it.

cyclictest records the maximum latency between when a timer expires and the thread that set the timer runs. It’s a fair indication of worst-case scheduler latency. 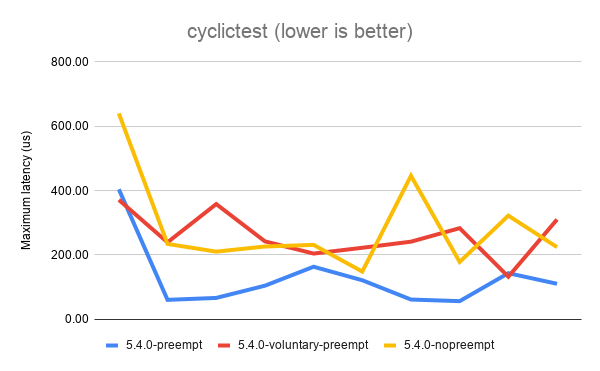 The above results show that the best (lowest) latency is achieved when running with CONFIG_PREEMPT. It’s not a universal win, as you can see from the first data point. But overall, CONFIG_PREEMPT does a decent job of keeping those latencies down. CONFIG_PREEMPT_VOLUNTARY is a good middle ground and exhibits slightly worse latency while CONFIG_PREEMPT_NONE shows the the worst (highest) latencies of all. Based on the descriptions of the kernel config options given in the preemption models section, I’m sure we can all agree these are roughly the results we expected to see.

Next, let’s look at sockperf’s TCP throughput results. sockperf is a network benchmark that measures throughput and latency over TCP and UDP. For this experiment, we’re only interested in the throughput scores. 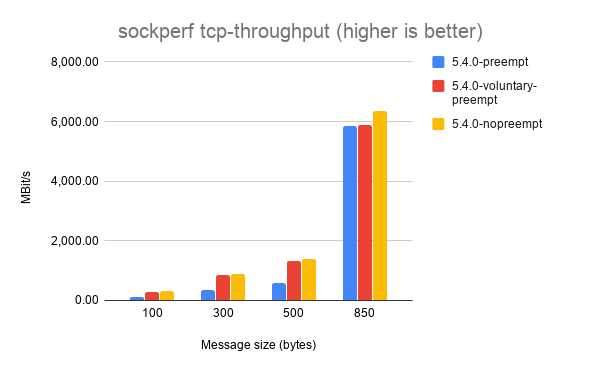 It’s a little hard to make out some of the results, but each of the different message sizes shows that CONFIG_PREEMPT_NONE achieves the best throughput, followed by CONFIG_PREEMPT_VOLUNTARY and with CONFIG_PREEMPT coming last. Again, this is the expected result.

Things get a little weirder with sockperf’s UDP throughput results. 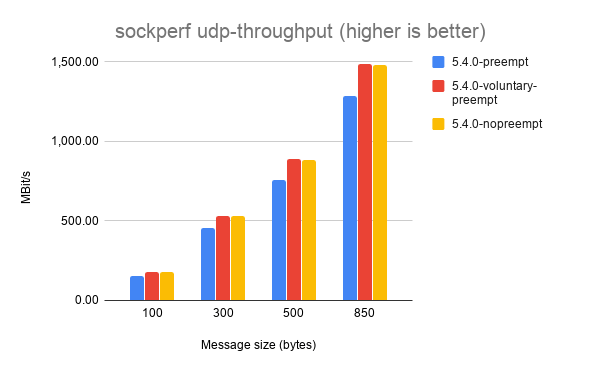 Here, CONFIG_PREEMPT_VOLUNTARY consistently achieves the highest throughput. I haven’t dug into exactly why this might be the case, but my best guess is that preemption doesn’t matter as much for UDP workloads because it’s stateless and doesn’t exchange multiple messages between sender and receiver like TCP does.

If you’ve got any ideas to explain the UDP throughput results please leave them in the comments!